Campania – Amalfi Coast
The Amalfi Coast is a stretch of a coastline in Campania region famous all over the world for its naturalistic beauty, considered World Heritage by UNESCO. The pride of the Italian peninsula, its position makes it the cradle of the Mediterranean, embodying the typical cultural and natural values. The Amalfi Coast means sea, rocks, sunny beaches, secret coves, along with the scent of lemons. It’ s a destination that seduces, enchants and has a strong magnetism on whoever visits it. A mosaic of warm colors and intense scents, the Divine Coast features many wonders to be discovered from Sorrento, just south of Naples, to Vietri sul Mare, renowned for its traditional ceramics that decorate every corner of the country. Amalfi is the heart of the Coast not only from a geographical but also from a historical point of view. Ancient maritime republic, Amalfi is now known throughout the world as well as a tourist and elite destination, for the production of fine paper, to which it has also dedicated a museum named Museo della Carta. Positano is a jewel suspended between sky and sea, which climbs up the slopes of the Lattari Mountains. Laying on beautiful terraces, it assumes the characteristic physiognomy of a nativity scene. Known as a destination for international tourism, the center is full of boutiques, restaurants, artisan laboratories, galleries, along the narrow streets and alleys with colorful window displays, typical of the area. Ravello, city of music and breathtaking views thanks to its dominant position on the top of the hill, offers spectacular views and among the best viewers of the entire coast. Then we have Capri, the “queen of rock” by Pablo Neruda, always synonymous of glamor and élite. Capri is the Mediterranean island that has seen the home for intellectuals, artists, writers, actors, stylists, attracted by its magical beauty. 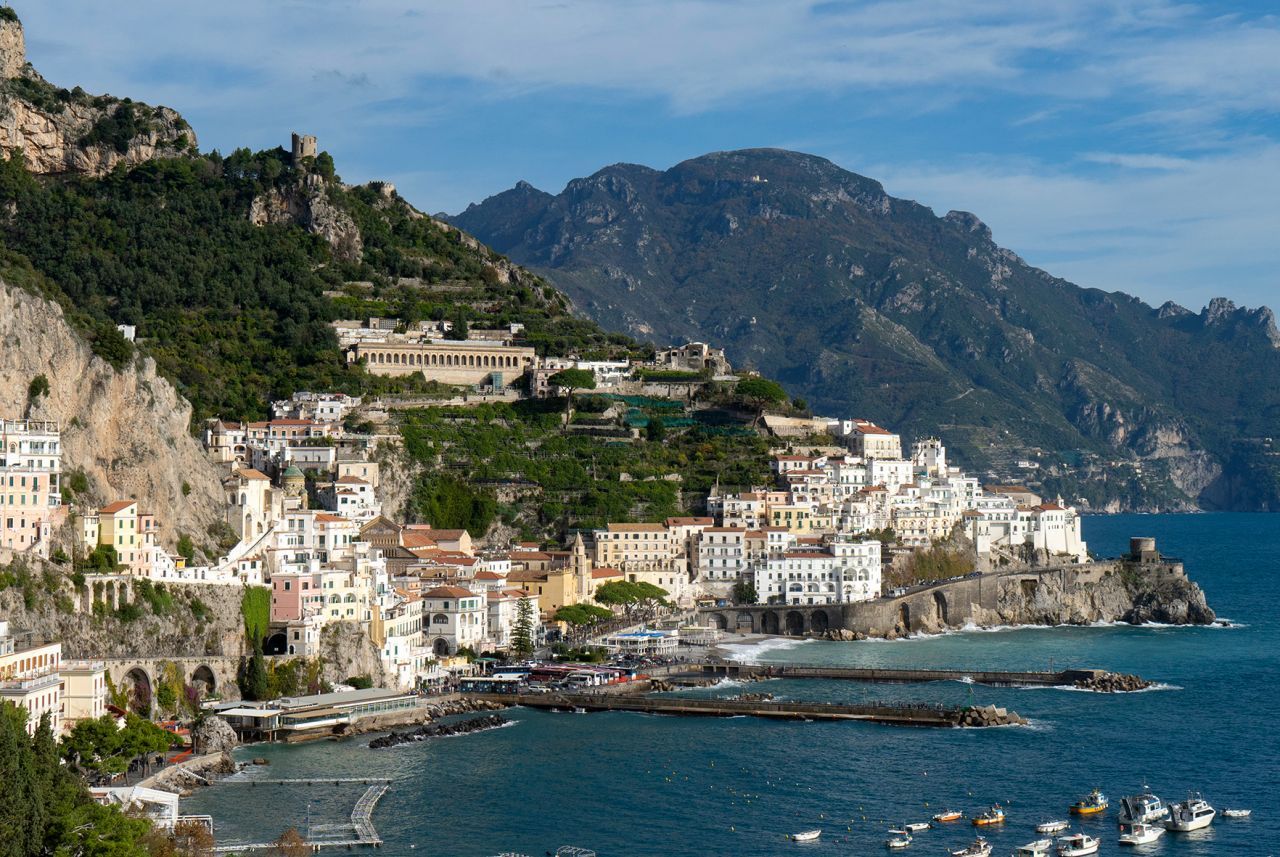 History, nature, worldliness, culture, events, have given life to the Myth of Capri. An exceptional tourist destination since the days of the ancient Romans, when the Emperor Tiberius fell in love so much that he made his refuge by building about twelve villas: among them the imposing Villa Jovis, still open to visit, from which he continued to govern the ‘Roman Empire. Today Capri can be considered the top destiantion for luxury and lifestyle holidays, glamour, celebrity, relaxation of the Dolce Vita style that is perpetuated and renewed for over 50 years. Romantic, chic and cosmopolitan, its Piazzetta is known as the salon of the world, here stars like Brigitte Bardot and Jackie O’ have set trends, and in more recent times it is a fixed stop for movie stars, entertainment and fashion icons such as : Leo di Caprio, Mariah Carrey, Jennifer Lopez, Dolce & Gabbana, Giorgio Armani, just to mention a few. The famous shopping street, with brands such as Gucci, Hermes, Chanel, Versace, Bottega Veneta, Louis Vuitton, leads to an incredible view of the Faraglioni Rocks, among the natural treasures of the island along with the Blue Grotto and the Arch Natural. Torquato Tasso called it “land of colors”: but this is just one of the many definitions attributed to Sorrento. It can be considered the entrance door of the Amalfi Coast, has been influenced over the centuries by different cultures: Greeks, Romans, Normans, Aragonese have all passed through here leaving their mark. With strong roots of the Anglo-Saxon world dating back to the so-called “Grand Tour”, when the knowledge of the Mediterranean was essential baggage of the Mitteleuropean aristocracy, Sorrento offers a different greatness compared to other tourist resorts in Campania. Less keen to folklore, more orderly and bourgeois, and very welcoming. From Sorrento it is possible to arrive in a short time to the archaeological area of Pompeii and Herculaneum, craddle of a millenary culture with no equal in the World.

VILLAS FOR RENT AND SALE